EllenaElizabeth
Creating, collecting & recycling textiles & papercrafts. I love preserving the past for the future. 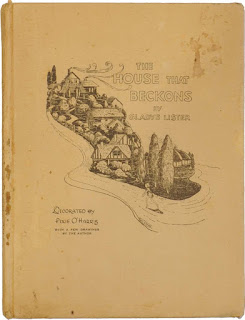 I've been very involved with family history for the last few years. I joined Ancestry.com and discovered Trove which is a fantastic Australian resource that's completely free!
I've been on a vertitable rollercoaster ride discovering so many exciting new facts about previously unknown branches of my family tree as well as my husbands.
The Henriques family were well known in Australian society of the time and through Trove I've been able to piece together many aspects of their lives. As far as I know Joseph Augustus Henriques was the first of  the family to come to Australia. He was the first US Consul in Melbourne, Victoria. He was born in Jamaica in 1823 and married Leah Louisa Lopez in Kingston, Jamaica in 1842. The marriage was performed by the bride's father, Isaac Lopez, a Jewish Rabbi. Joseph and Leah's son Frederic Augustus Henriques was born in Melbourne, Australia in 1853 but at some stage went back to the USA. There he married Florinda Lister Montgomery, who was born in New York 1854 the daughter of Irish Immigrants, Samuel and Eliza Montgomery.  Frederic and Florinda left for Australia very soon after their marriage and raised a large family as they travelled throughout Western Australia, Victoria and finally New South Wales.
My husband's great grandmother Viola was their daughter. She married Emil Francis Gerber and after their marriage in Melbourne they settled at Widgee just outside Gympie, Queensland. There they had a dairy farm for many years until their house burnt down after which they moved into town to live near their daughter and son in law Sid & Nancy Rankin.

The above book cover is from 'The House that Beckons' by Gladys Lister 1940.
Gladys is a relatively well known Australian authoress who also illustrated some of her books.
The above book cover was illustrated by Pixie O'Harris.
Gladys was the sister of my husband's great grandmother, Viola Gerber nee Henriques.
I've discovered so much but feel there is much more to find and I cannot wait!
Posted by EllenaElizabeth at Friday, November 24, 2017 1 comment: 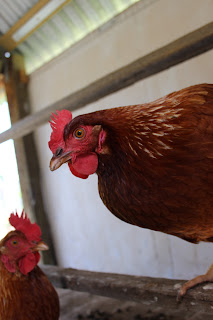 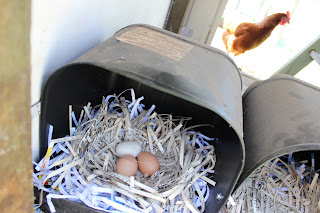 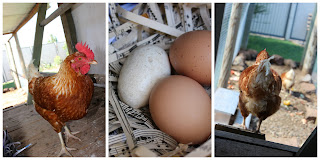 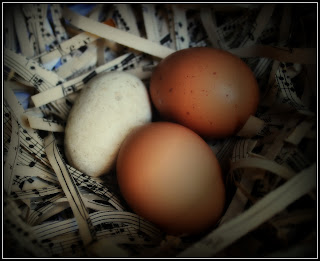 I love my chooks.
I have four and each week they produce roughly 2 dozen eggs.
I line their nesting boxes with shredded vintage sheet music....
just for a bit of fun really.
I love they way they eat our veggie scraps.
I love the way they eat pests in the garden like snails, and cabbage moths. 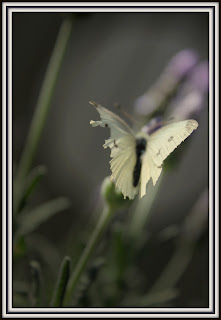 Thanks for visiting me and my four brown feathered girls today.

Love the Eiffel Tower even though I haven't been there. 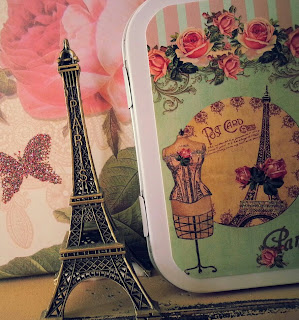 Good morning.
I hope there is someone out there reading this...I have not blogged for so long because I cannot load any photos and what a bland blog it would be without photos....right?
This one seems to have snuck through... I took it last week.
I love the Eiffel Tower and have always for as long as I can remember.
I know it's a 'fad' at the moment but not to me.
Anyhow last year my good friend travelled to Europe and UK and whilst in Paris bought this little facsimile for me.
Cute isn't it? 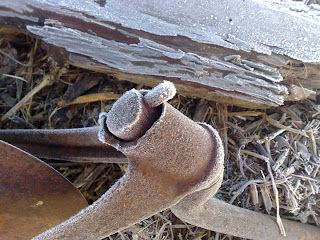 This photo is of a heavy frost 2 years ago.
The weather has been coolish for a couple of months now,
unseasonally so I might add.
This morning it's only 5 celcius which is just above freezing.
Hopefully we'll have a good cold winter here on The Darling Downs, Queensland and plenty of frosts which I know my orange
and mandarin trees will love.
So will we when we are lucky enough to eat their fruit. 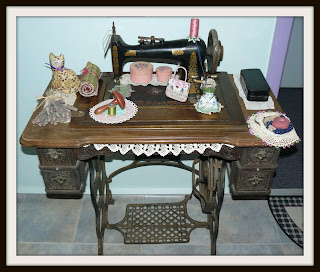 My great-grandmother's sewing machine.
It's a Beirne. Have never seen another one like it. 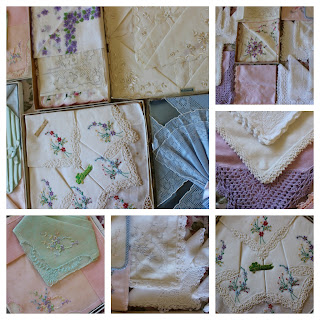 Some of my vintage handkerchiefs.
Hello all my blog friends.
This is my first post for yonks because I have been un-able to load any pictures to my blog.
Today miraculously I could.
Therefore I didn't have anything cohesive planned to blog about...this was sort of a test and somehow I was allowed to load these 2 pics.
I was informed I had to buy extra space so that I could upload photos etc and when I tried to pay the facility was not operating etc etc so therefore I couldn't pay and hence couldn't upload pics.
What is with Blogger?
It's so random...quite annoying as I haven't blogged for ages and ages and missed it so much.
Anyone else had problems like this?
Any tips?
Have a great day. 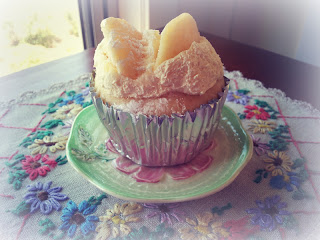 Isn't she pretty?
This little cake is quite special.
Recently my family had a re-union picnic that I could not attend as I was recovering from spinal surgery.
My aunty is a great cook!
She knows I love her butterfly cakes...
so
she gave two of the precious little bundles to my mother to freeze for me.
This week my parents came to visit me and Mum brought the little cakes with her.
I LOVE them so much. The cake is light and moist. The mock cream is light and delightfully not too sweet......Bliss!
These little cakes made a huge journey to get to me, starting on the wide bay coast they travelled 165km to the picnic spot, then 175km to my parents house and then 114 to my house.
A journey totalling about 450 km.
They are gone now, I ate them.
Blow the diet!
I stick to it faithfully MOST days but eating these little cakes was pure pleasure and not just because of their deliciousness.
I miss out on so many activities due to being housebound with spinal troubles.
This lovely gesture was so touching.
Thank you Aunty Sue.
xxxx﻿
Posted by EllenaElizabeth at Wednesday, November 14, 2012 9 comments:

Vintage linen and a spring garden

A recently purchased vintage linen with exquisite crocheted edge
is sprucing up the top of my microwave. 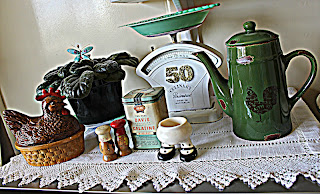 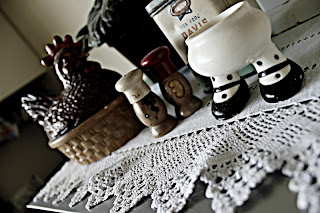 Outside, spring has sprung and our lavender walk is blooming! 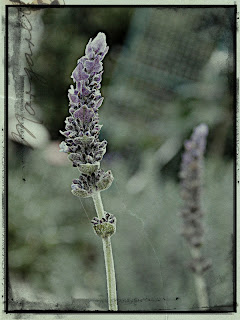 This corner of the garden has lavender, shrubs and bearded iris' that all flower in shades of purple 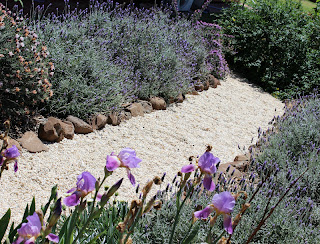 Our pretty climbing pink rose is full of buds and is growing over the arch quite quickly. Hubby now says he wishes he had bought 2 so the arch would be covered quicker. I think it will be complete by the end of summer. 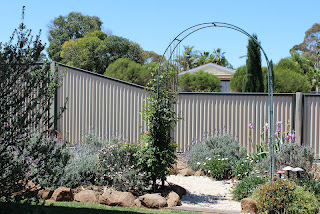 Gordon likes to be photographed I'm sure. 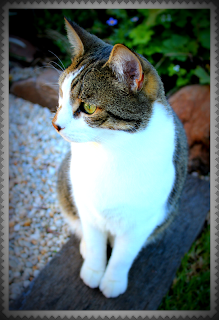 This is his sister Edie, the best mouser in the street.
You would never know they are siblings as they look nothing alike.
Gordon is better friends with our scottish terrier than his sister, as she is a bit of a loner. She does however love my husband and I, just not other animals it would seem. 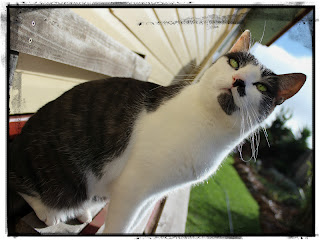 Thanks for visiting.
Leave me a comment I'd love to hear from you.

So happy to see my little Scotty girl
after being away from home for so long. 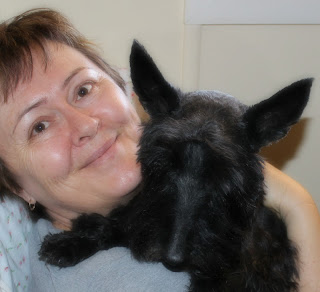 It's so wonderful to be home again, five weeks to the day.
How I have missed being in my own home and seeing my dear hubby and pets. 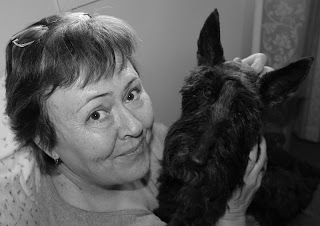 I had two vertabrae fused with titanium screws
and two new discs and bone grafts.
Last year I had one vertabrae receive the same treatment. 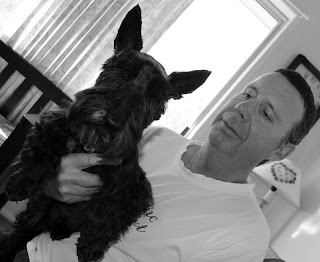 The healing is very different this time.
Less pain but less mobile.
Anyhow I'm hoping for the best and maintain my confidence.
Hopefully I will have less pain, more mobility and more freedom, as I have been mostly housebound for the last 19 years in varying degrees.
I may even be able to do some travel with my DH and hopefully even be able to drive myself around a little or a lot, I'll take either.
Thankyou to all who prayed for me.
I so appreciate it.
You are such gems!!! 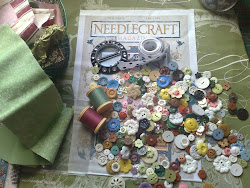 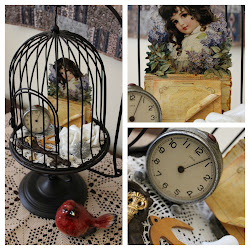 Check out my boards.

I'll be sharing my studio again this year!

One of Mum's doileys at the 2008 Ekka, Queensland.